Reasons to join our master the mountain camp

Scale new mountains and conquer the Canadian backcountry. This is our master the mountain camp. (5 min read) 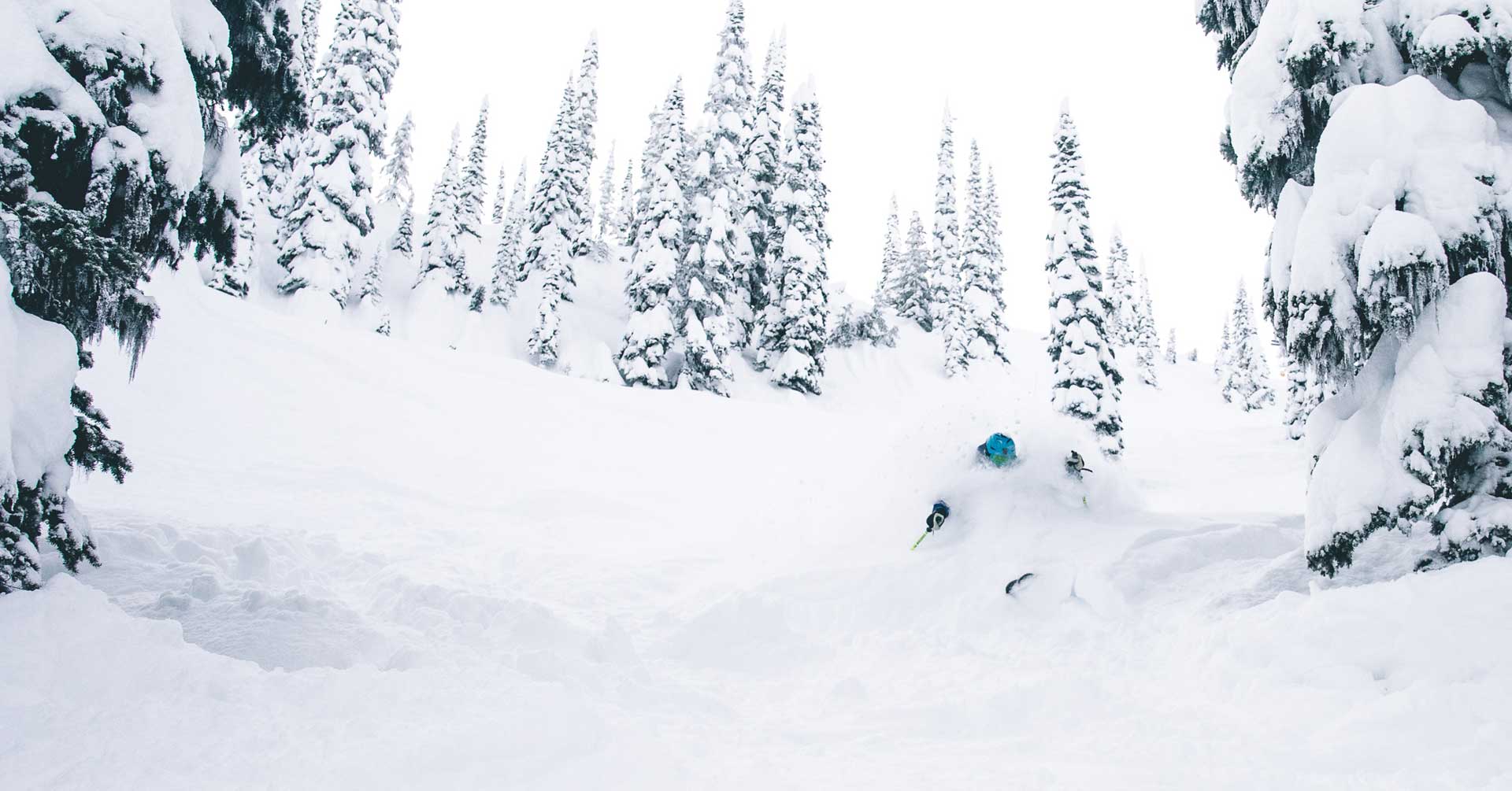 Could this be the ultimate ski experience? Our ‘master the mountain’ off-piste camp brings together a close-knit group of passionate riders with our all-mountain coaches and backcountry experts to serve up an epic Canadian adventure. Designed for skiers and snowboarders set on pushing their skills, exploring more terrain and getting into the backcountry, this course will have you staring down the mountain with total confidence.

Four weeks in duration, take on a mini-season and fully immerse in mountain life – both on and off the slopes. Based out of Fernie, British Columbia, here are a few reasons to get involved.

This course is designed with one goal in mind: to leave you able to ski or snowboard the whole mountain with confidence. From powder and steeps, to trees and gulleys, you’ll hone your skills in all kinds of terrain – and start to look at the mountain with fresh eyes. Our coaching is a blend of guiding with instruction to allow you to maximise your progression and fun on the hill. You’ll receive four days of all-mountain coaching per week and explore the best terrain based on snow conditions and group vibe. Coaching focuses on various themes including steep and deep, tree tactics and bumps. The course is suited to a range of abilities from intermediate through to advanced, with groups organised by experience and fitness to ensure you’re pushed to the right level.

— I feel like I’ve really improved my ski technique as well as my confidence in challenging terrain. I can handle tree lines, traverses and steep and deep. What more could I want? –Frankie 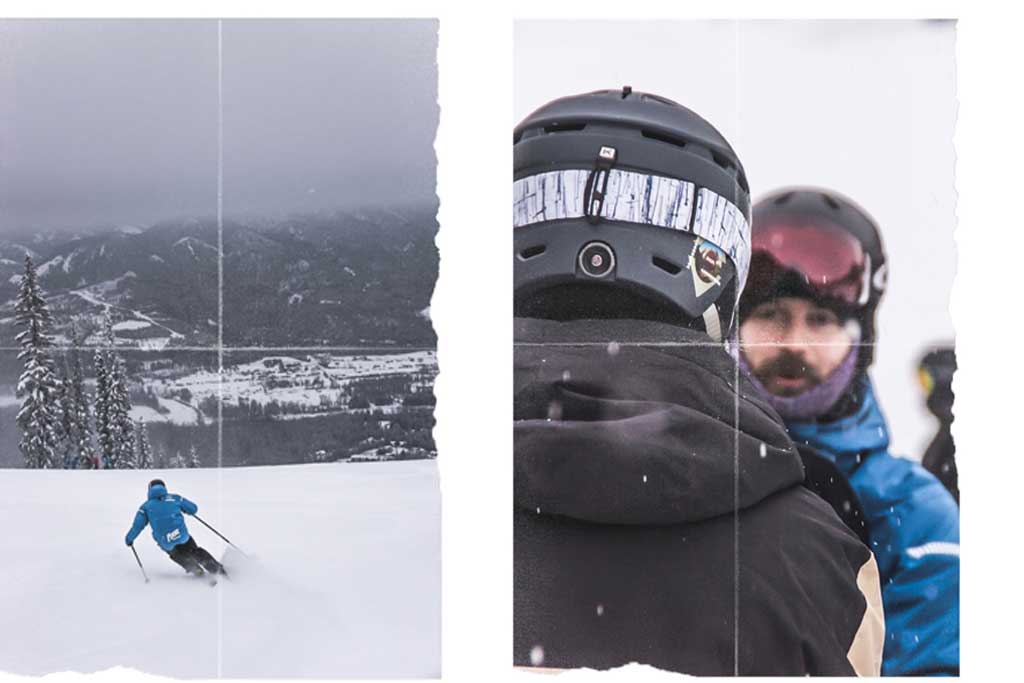 There’s only one mountain fit for this course. Located in the southeast corner of British Columbia, Fernie is a hardcore resort famed for its champagne powder, adventurous terrain and crowd-free slopes. 2,500+ acres of diverse skiing span across five alpine bowls, with epic trees, open groomers, natural gullies and powder fields all on the menu. And the town…. picture a laid-back vibe, funky coffee shops, welcoming locals plus great bars and restaurants. A genuine mountain community, you’ll quickly feel at home, and stress-levels will plummet.

— Fernie never fails to disappoint! This is my second year here and I know it won’t be my last. The resort, the people and the powder have been some of the best experiences of my life and the MTM course has been a fantastic excuse to spend over a month on snow, nonstop skiing. –Frankie 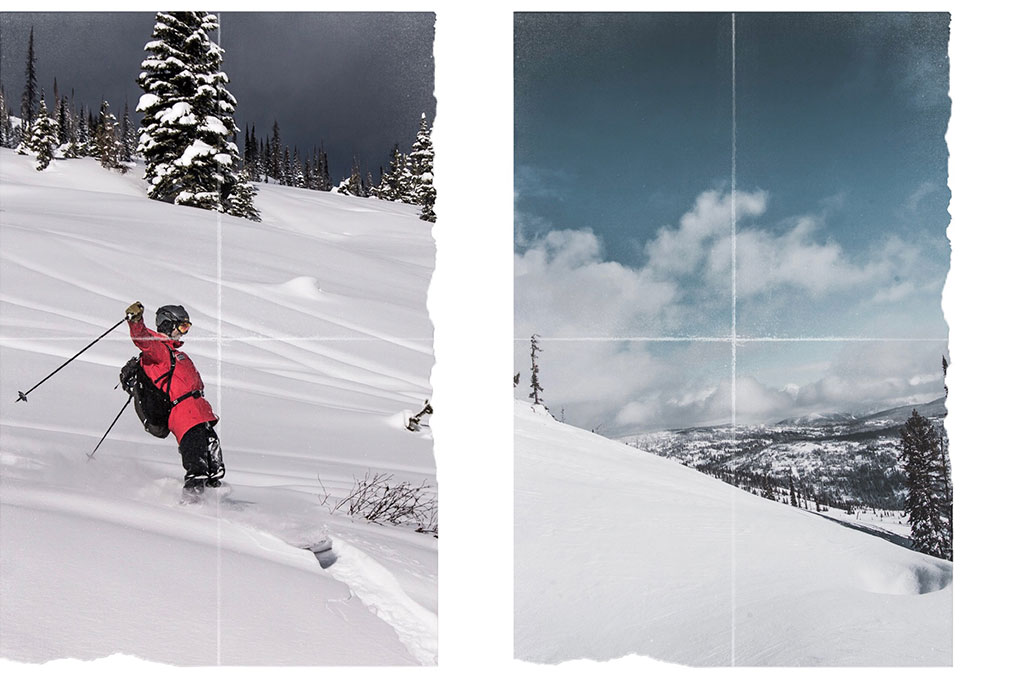 Ever dreamed of venturing beyond resort boundaries? Think endless powder bowls, bracing views and utter silence. This course will introduce you to backcountry touring and give you newfound respect for the mountains. As the backcountry capital of the world, Canada is the perfect place to get hooked. You’ll be provided with touring gear and shown the ropes in Fernie slackcountry by experienced guides. You’ll learn how to stay safe and master the correct techniques for ascents and transitions. The reward: untracked turns through virgin powder.

— I’ve skied my whole life but touring was new to me. There’s something so pure about earning your turns. Methodical uphill climbs in the wilderness. It makes you truly appreciate the power and beauty of the mountains. Of course we get to ski fresh lines, but the whole process is rewarding. -Peter 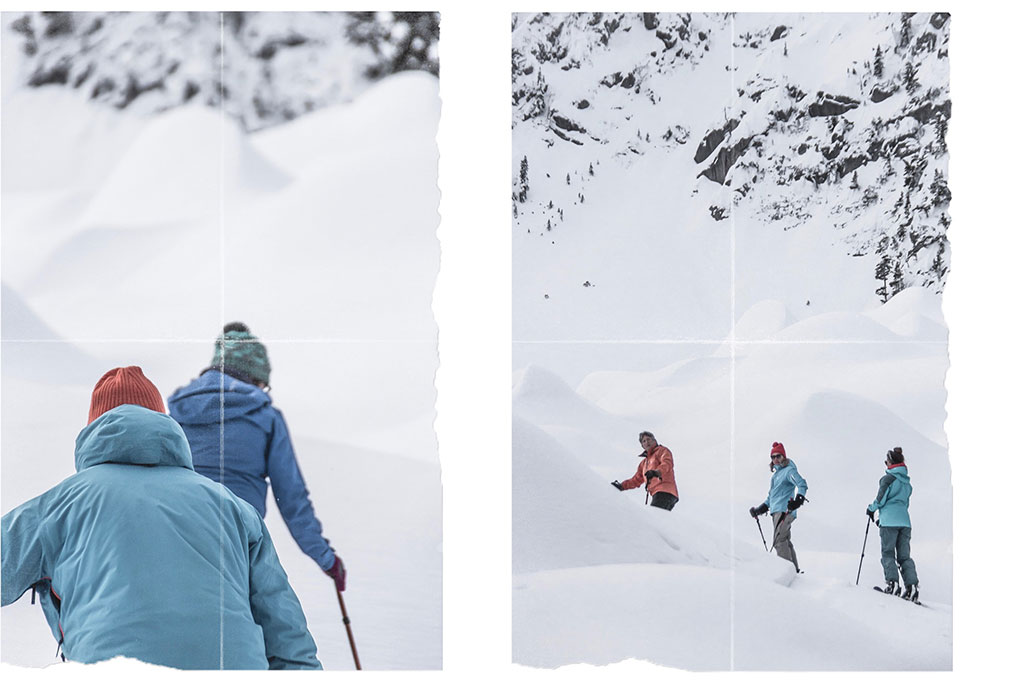 You’re at the summit after a two-hour ascent. The views are endless. It’s just you, 11 friends, two guides, and a bear-like dog called Rosie. The lead guide points to the line you’ll ski. It’s an untouched gulley. A huge rock band on the left, the fall line funnels toward a narrow chute, then opens up into a huge powder field. It’s not been skied all winter, and the conditions are perfect. One-by-one, you drop in.

The finale of this trip is a four-day touring trip to the Boulder Hut. Nestled deep in the Purcell Mountains, the hut can only be accessed by helicopter. No connectivity, this is a rare chance to disconnect from the world and truly enjoy backcountry life with a close group of friends. Early wake-ups are followed by hearty breakfasts. Each day you’ll be guided to different areas of the ginormous 15,000 acre tenure. You’ll tour as a team to find fresh snow with chutes, gulleys, tree lines and open slopes up for grabs. When you return to the hut after a full day in the backcountry, expect home-made soup, rustic sauna sessions, delicious meals and chatter recounting tales from the day.

— The Boulder Hut is this backcountry cabin set in the middle of the Purcell wilderness. We got flown in by heli - that alone was an experience. As we flew over the high pass – an exposed ridge which can sometimes be a little sketchy owing to wind - the pilot joked it was his first time. Canadian humour, ay! We landed in what only can be described as Narnia. Enclosed by peaks in every direction, deep snow surrounded the walkways that are shovelled almost every morning. There are several cabins, the 'Boulder Hut' being the central communal area where we hung out, ate and had briefings on conditions and such. Then you had the 'Cassa' - where we slept, two 'outhouses', a cabin for the guides and cook. -Ben 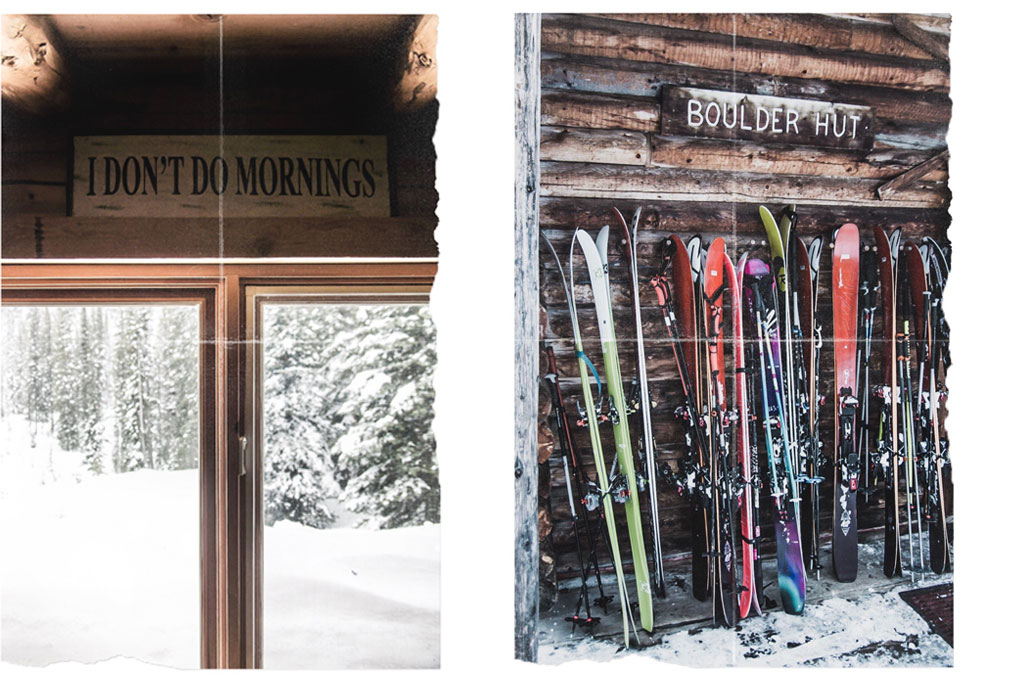 No friends on a pow day? Not our mantra. Highly social, this course brings together 24 people from around the world. We’ve found limiting spaces ensures a close-knit group dynamic to maximise the experience. You’ll meet like-minded folk, forge friendships and swap stories over post-powder après sessions. Most people that join are solo travellers, but some come with friends, too. All of the same mindset, you’ll share incredible moments together in the mountains.

— It was an amazing experience. I’ve met so many amazing people on the course from Australia to Denmark, plus our instructors and host were incredible, too. -Celine 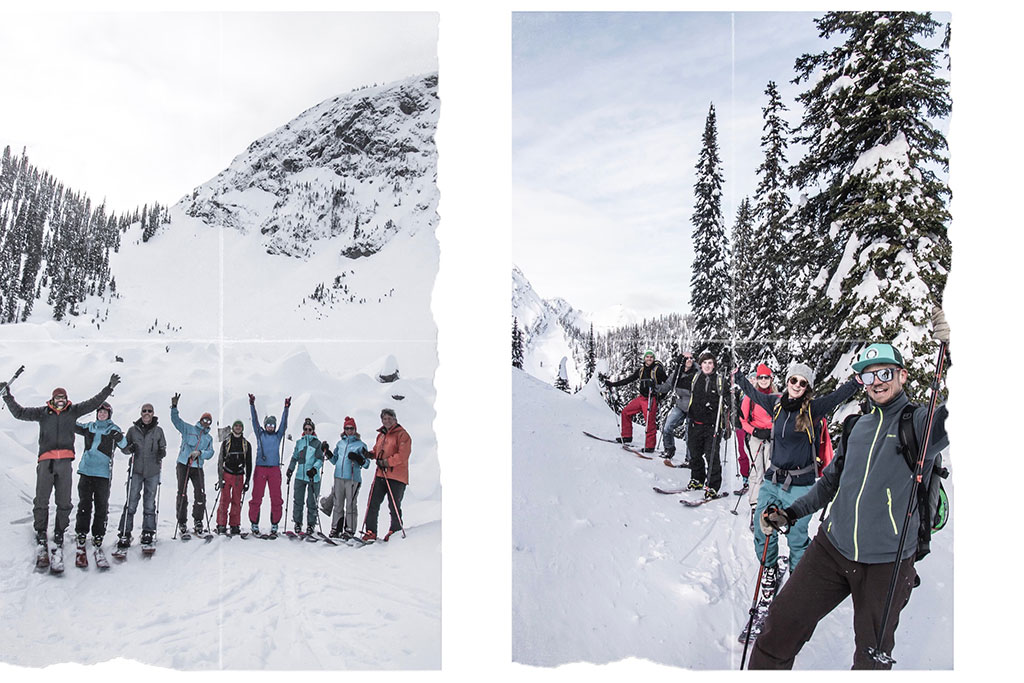 This course is action packed in every sense, and a true bucket list ticker. Living in the mountains for four weeks, you’ll have plenty of chance to notch up adventure. Canada is the home of cat skiing and you can put your newfound powder skills to the test part way through the course on a guided cat ski day. With a snowcat as your ride, you’ll weave up snow roads and drop into backcountry powder fields. Expect 10+ runs and beers on the way down. 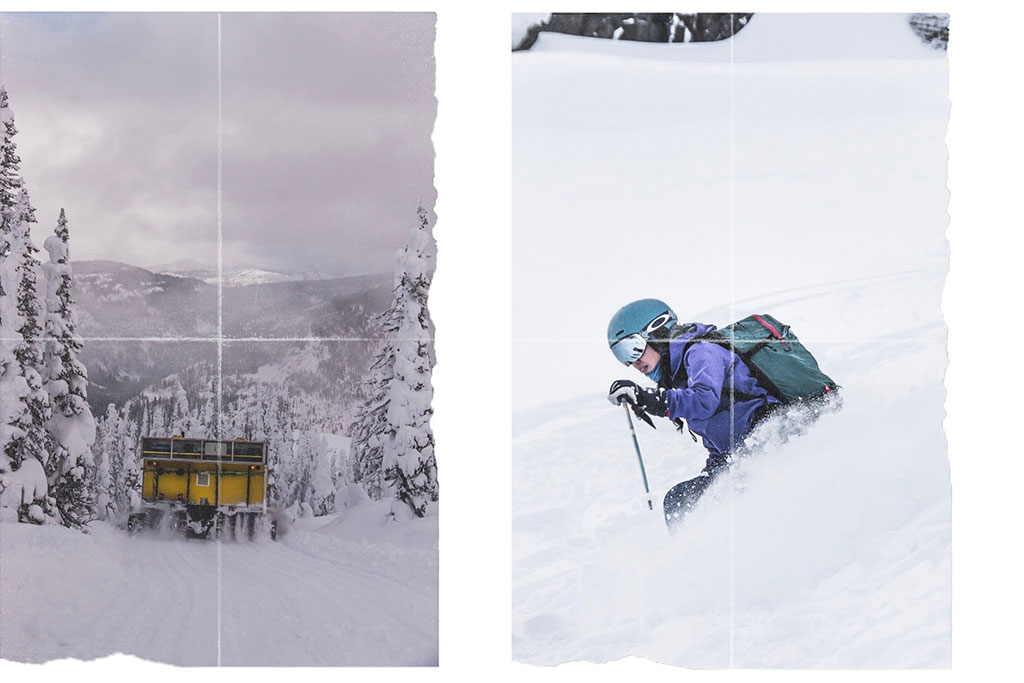 Are the mountains calling your name? Long office hours and city living can take their toll on the best of us. We firmly believe in taking time out to pursue your passions, whatever they may be. A four-week dose of fresh mountain air could go a long way, and Fernie's laid-back nature and endless skiing are the perfect antidotes to the stresses of day-to-day life. This course gives you the opportunity to spend an extended period of time in the mountains to reset, while working towards your personal goals on the slopes and pushing yourself in the backcountry.

— One of my good life decisions. -Frank